Among the projects discussed at the meeting was the New Yangon City (NYC) development.

Xi called for speeding up the implementation of such projects, according to a Chinese Embassy in Yangon press release

Myanmar President U Win Myint said the country would deepen cooperation to advance the implementation of CMEC projects.

The call largely focussed on cooperation in tackling the COVID-19 outbreak, and no further details on what was discussed regarding the NYC project were revealed.

The call between Xi Jinping and U Win Myint followed Chinese Ambassador to Yangon Chen Hai’s 6 May meeting with Deputy Minister for Planning, Finance and Industry U Set Aung for “in-depth discussions” on CMEC project implementation.

Among the projects discussed at the meeting were the Kyaukphyu SEZ and deep-sea port, Myanmar-China border economic zones, and New Yangon City developments.

The meeting was held following the release of the COVID-19 Economic Relief Plan (CERP), which was published on April 27.

The CERP details the country’s short- and medium-term plan to deal with the economic impact of the pandemic and includes stipulations to expedite the solicitation of strategic infrastructure projects, as well as approve and disclose large investments by reputable international firms that are experiencing delays.

Myanmar Real Estate & Construction Monitor notes, however, that there has been no major acceleration of the implementation of CMEC projects because of the COVID-19 outbreak, while the notion that projects are being pushed through due to the outbreak is likely exaggerated.

These recent meetings between Chinese and Myanmar officials may rather be seen as routine diplomatic exercises, rather than a concrete shift in CMEC project implementation.

It is part of the 2040 Yangon Masterplan drafted by the Yangon City Development Committee with assistance from the Japanese International Cooperation Agency.

According to the master plan, it is expected that 1.2 million people will be living in NYC by 2050.

In March 2018, the Yangon Regional Government introduced a new company, the New Yangon Development Company (NYDC), with Serge Pun as its chairman to oversee the development of the NYC.

For NYC phase 1, China Communications Construction Company (CCCC) signed a framework agreement in April 2019 with the NYDC to carry out the initial surveys and studies.

In November 2019, Serge Pun revealed that the NYC would see accelerated developments because of the influx of requests for industrial space amid the US-China trade war, with companies looking to shift operations out of China.

Myanmar Times reported on 18 May, however, that developments at NYC had been postponed due to the COVID-19 outbreak. 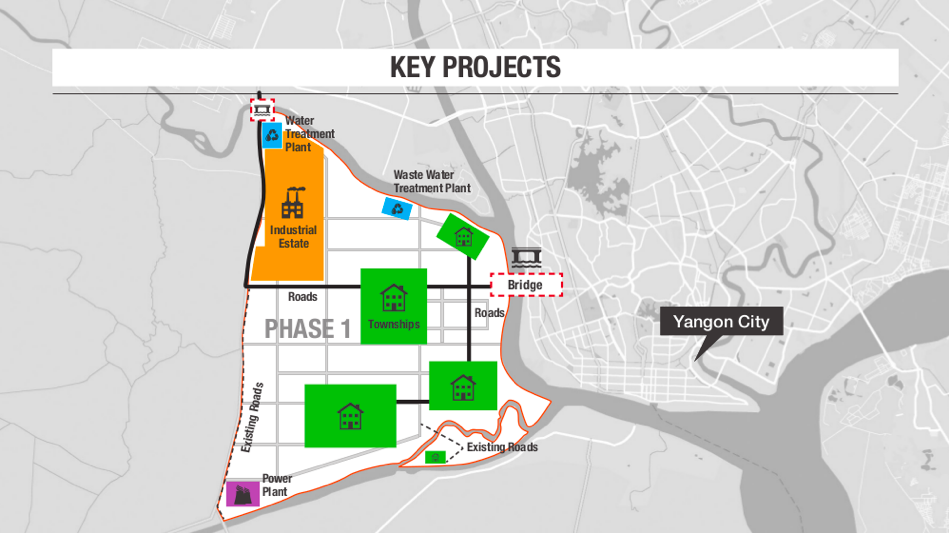